This article is an update of the one I wrote back
in November of 2014 "AFRICA - EBOLA -THE NEED.
Poem by  edlorens / NEWS IN BRIEFS"

Present article contains:
1. compilation of my four
poems about EBOLA

The youth and old are dying,
Africa-for her children crying.

Africa: do not cry!
To help, let us try!

Eyes wet with tears,
people hiding in fears.
with insane, burning pain
life lost meaning - is in vain.
old faces scare,
one doesn't dare!
Think of next day,
what it brings may!

Ebola:
With the world connected
easy to get infected.

For centuries Africa - used,
by white, his own
-exploitation, corruption sown.
To Africa, we went
to get a slave,
diamond for rich,
animals - to slain!

We have a heavy sin!
Come and help to win!
Give to Africa in her need!
Fight Ebola, children feed!

With help Africa shall bloom,
without - to 'lack' she is doom!

Give medication!
Assist with sanitation!
Clean water, education,
teach, give and build...
modern Africa that will
prosperous world follow!

Africa in pain is crying...
Ebola by her doors is lying,
without mercy killing.
Life-before time is stealing.
The life that had so little,
with little to spare
...Now is more brittle
...and more bare.
Nobody safe,
not the one that sick,
not the one that gives care.
No compassionate hand,
love message to send
by comforting touch.
By touch - one can Ebola catch!
Feverish pain and fear.
Death took all that dear!
Can't run,
can't hide
there is no safe site.
No food,
no bed.
One can cry and pray!
Undignified death,
and a simple grave.
Only left to share!
edlorens

STOP EBOLA HORROR!!!
How to breathe,
when the heart freeze,
from shock - seeing disease.
No way to see light,
when the thoughts in fright!
The fear, the horror strike...
the demon rise
gloating inhuman cries.
The deathly virus seizes
everybody insight...

How to see life on happy sites,
When one Ebola fights?
The lonely dying...
neighbor distance keeps
the bloody liquid from body seeps...
Fire of fever, vomit
rash eating skin...
the world dark and mean...
Tormented body twisted in pain...
Insight corpse after corpse
stretching in the lane...
The number growing
-is on the rise...

One touch Ebola - life is the price!

No help in sight.
The lonely fright,
the lonely fight...
in a confine of the grave,
the body shall lay...

...The bats at night are flying,
and more and more are dying...
edlorens
edlorens.blogspot.com
Ed Lorens YouTube

UPDATE:
The day when WHO announced that finally Africa is practically
free from EBOV, the body of the 22 years old female student from
the Port Loco area had tested positive for Ebola. The virus was
confirmed by routine swab testing. The victim visited for treatment
one or more hospital, but she was released and sent home.
the authorities, at this point, do not know how she got infected.
She died on Jan. 12. There were no safety precautions taken during
her funeral. Now 150 people are being monitored and quarantine.
One other person, the close relative also was confirmed that
has the virus.
According to the Dr. Bruce Aylward, from the health organization
in the past 9 months, there were at least 10 flare ups or  "embers
basically of this crisis". Simple blood test could bring instant
diagnosis, but it is not performed widely since there are about
2 million incidents of fever per month in the three countries.
(  Dionne Searcey and Sheri Fink in New York Times - Jan 15/16)


Below tables are  from WHO - VICTIMS OF EBOLA STATISTICS IN AFRICA 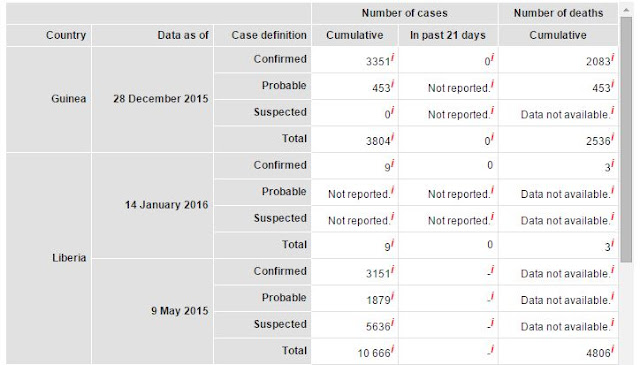 With  the look at the above photo of the shantytown in Africa,
the immediate answer to the persistence of the disease is clearly visible.                                   The poverty, the shabbiness, the closeness of these human dwellings is the base
for  spreading the disease. The poverty is responsible and pairs up with the
disease along with the lack of education, hygiene and availability of the meds.
The other factors are environmental such as tropical climate, people's habits
such as eating infected bush meat or traditions like African's burials.
Worldwide human casualties resulting from Ebola - Heathmap

The original article, below still has informative,
historical value.
NEWS IN BRIEFS

As of December 12 according to HealthMap the breakthrough
in those three countries is:

Guinea 2,339 cases1,454 deaths
Sierra Leone 8,014 cases1,857 death
Liberia 7,765 cases3,222 deaths
Sierra Leone has the highest count of
outbreaks and Liberia have the highest deaths toll.
But Daily Star of Lebanon, quoting WHO, brought
to the attention
alarming situation presently in Sierra Leone. Except the
south of the
A country, the EBOV is spreading intensely.
in the week previous to November 30, there were
385 new outbreaks.
That number rose drastically in the week on November 30
to 537, from which 202 are located in capital Freetown.
According to WHO, a number of the beds is adequate
but a problem is with its locality.

2. Wednesday, the man from Guinea, running the high fever, managed to cross the border
at Fulamari  to Bissau.
He was  taken from the bus to city Gabi along with eight  passengers and held
for an observation.
The 300 km (185 miles) landline border between Bissau and Guinea was
closed since August 12 and reopened just last Tuesday.  Up to now Bissau
avoided outbreaks of Ebola but  WHO said that Guinea-Bissau had an
"inefficient health system which would not be able to cope with an outbreak of Ebola".

4. As Courier Mail reported on December 13, this year in Sierra Leone, that has
about one-fourth Christians population, celebration of the holidays, Christmas
and New Year is banned. The news was delivered to press in Freetown
by Palo Conteh,
the chief of the department. Soldiers will patrol the streets to make sure
that people would not venture out.

5. TWO MORE DOCTORS DIED!
* The 44 years old native of Sierra Leone, but permanent resident of USA,
Dr. Martin Salia, who last week tested positive on Ebola and was brought to the
Biocontainment Unit in Nebraska in critical condition - died this  Monday.
Dr Phil Smith, medical director of the Biocontainment Unit at Nebraska Medical Center,
on Monday said:
"Dr. Salia was extremely critical when he arrived here, and unfortunately, despite our best efforts,
we weren't able to save him,"
Daily Star of Lebanon observed that this was 2nd death case of
10 in in US. It is unclear where Dr. Salia contracted EBOV,
since
besides being chief medical officer at United Kissy Hospital in
Freetown, Sierra Leone, he also worked in some
other medical facilities.

* Another doctor, in Sierra Leone. Dr. Moses Kargbo,
was working in government hospital located in Tonkolili
district, when he got infected with EBOV.  He was transferred
to Hastings Ebola Treatment Center, nearby Freetown, where
he died Tuesday.

RELATED ARTICLES/POEMS from this blog: