I HAVE BEEN SEXUALLY HARASS ON INTERNET - PREDATOR EXPOSED!

I never on internet presented myself, directly or by implication as interested in adult
material. My avatar is of older female face, unedited, just like thousands others on internet
- no 'skin' showing. Actually, I would not mark 'as follow' anybody who I feel is blatantly displaying his/hers  body sexuality. My'About' page clearly states that on internet
I am looking for friendship.
Webster Encyclopedia of Dictionaries describes friend as '...one attached to another
by esteem and affection: an intimate associate: a supporter..'
This is exactly what I want: a circle of  similar minded individuals with variety of interest
to share, discuss and enjoy - to participate in the same good. Adult material, simply
do not belong in my world. Kittens, puppies, birds, flowers, scenery, inspirational
thought -do -along with all humanitarian issues. We, in my circle of Google+ are
affectionate and respectful toward each other.
So, Why me?

Sometime ago, seeing somebody to appear as animal lover, I marked 'follow'. Then he initiated few chats,  short & quite respectful Next he asked me to check my email. There was
'poem' - extreme sexual. I felt insulted. On chat I informed him That I've absolutely no interest in adult subject. Next  more very insulting sexual suggestions with explicit sexual photo. I blocked him. I do not see him any more on posts.  But then I got in my email..oh, auntie please unblock me...
followed by numbers of email with sexual material. I moved him to spam and then sent feedback to Google asking for help. No action. I stopped opening his mail, before throwing it away. But the ugly, unwanted suggestions are in the titles insulting, making me angry, frustrated and feeling sexually harassed. Yes he is still blocked. Once (totally I recall maybe 3 chats) he tried to get on webcam with me - my browser, screen somehow jump possibly mark wrong thing. I do not know, but I prevented that webcam (I do not like webcam anyway, plus always short on time).
Now, he changed his image and he is using some innocent men photo (another victim), pretending to be him, but still his name. Why Google (who threw senator letter to me, and another time my poem to spam)  allow this predator use my email?
Google grew very intuitive, knows my browsers, should know I would not want adult material. I
n all set up I mark 'no adult'.
I saved that sexual offender last two letters as evidence to be presented to Google if and when
I'll be able to reach right department.

I recall one of my friends,also from California, after moving from one place to another, took his kids to local police station and together they examined photos of convicted
sexual offenders and pedophiles. As responsible, caring parent he took this course as mean of protecting his kids from predator.

In comment to Maeve Duggan's article in  Pew Research Center
Hal Burton • 2 months ago said:
'I fail to see how one can be “harassed” by the fictitious typing of an invisible hand. All my devices have a delete button for a reason'.
True. Mine too. But, that is like by allegory instead of dealing with offender we would
suggest to take kids out of the playground where predator was seen. Children have right to the playgrounds and they have right to enjoy their activities there fully and safely. Same here. We should have right to enjoy internet without being hunted by
unwanted, undesirable and insulting dirty minds, somebody who is getting his/hers
satisfaction by knowing and imaging shocked reaction.
On online the sexual predator is a flasher.
We not only delete the spam, but we report it. We have right to keep our environment,
including our virtual reality free from harassment and dirt.
Sometimes delete button is not enough.
Sometimes delete button comes too late to act, after seeing flashed
picture by and/or  dirty suggestions in title unavoidable not to see.
By just repeatedly deleting without doing more, we build confidence of the predator.
I've no doubt that I am not the only harassed and I've no doubt that this specific
predator is currently in similar manner insulting number of other females.

Time to fight back!!

I don't see any other way to free myself from this online sexual predator who lives far away from me but by making his name public. I can not publish the photo, since is stolen and not him. He changed his avatar .The handsome, young man image that he is using on his avatar is another unsuspecting victim.
The mute, blocking sometimes work, but not if blocked person  is still allowed to harass by email.
Any other suggestions?  ﻿
Add a comment...
The ONLINE SEXUAL OFFENDER'S name that few days ago again dared to leave the dirty
package in my email (title, suggestion and porno photo) is:

DEVINDA CHANDRASEKERA
The title in my mail, unavoidable not to see, even without
opening mail:

Non-partisan, fact tank organization PEW RESEARCH
'...defined online harassment as having had at least one of six incidents personally occur to someone: name-calling, efforts to be purposefully embarrassed, physical threats, harassment over a sustained period of time, sexual harassment, and stalking.'
( Maeve Duggan,-Pew Research Center) According to the same source 40% internet user experienced
some type of harassment in the course of using internet.

But specifically on the subject of sexual harassment G. Wiesen (WiseGeek, 02.01.2015) said:
"Sexual harassment of any kind, including online sexual harassment, typically consists of words, images, and actions that are sexually explicit or provocative and make the receiver feel threatened or strongly distressed."
http://www.wisegeek.com/what-is-online-sexual-harassment.htm 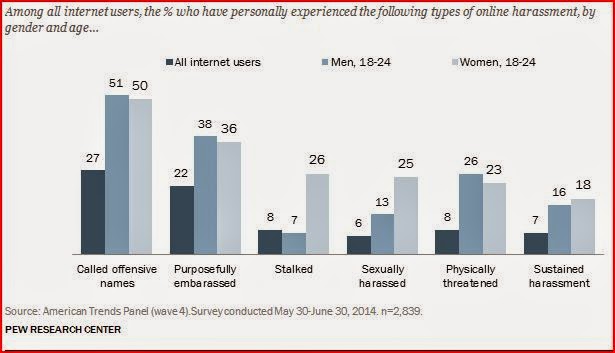 I am sharing  (extract) +John Skeats post, that was shared also by +Ray Hiltz   Very informative, skillfully written post in regards to usage of mute and block buttons. Too bad they do not work in email and that blocked person still can use email as channel of harassment.

#googleplustips
You gotta know when to mute them, know when to block the
+John Skeats tells us the difference between muting and blocking a Profile or Page and what the limitations are of each.

#googleplustips
John Skeats originally shared:
To Mute or To Block? That is the Question!

Google+ provides two functions for limiting the ability of people to interact with you: you can Mute or Block the people...

Mute prevents the profile or page you mute from notifying you in the future...

Dealing with extreme problems
If the reason you want to Block someone is because you believe their behavior violates the Google+ User Content and Conduct Policy(http://www.google.com/+/policy/content.html), please report the specific posts or comments you believe to be in violation and possibly the profile or page, as well. It is very important to report the specific items you believe to be in violation in addition to the profile so that the Google+ Abuse Team can see exactly what you perceive to be the problem.

Did you ever felt sexually or otherwise harassed on internet?
Do you think I am right exposing publicly the predator from my email?
Please, let me know what you think and leave the comment.
THANK YOU.

http://www.pewresearch.org/fact-tank/2014/10/30/5-facts-about-online-harassment/
'Pew Research does not take policy positions. It is a subsidiary of The Pew Charitable Trusts.'