NOW YOU GOT A GUN!

The right of ownership of a gun should be somehow balanced
without violating constitutional rights.
The problem is how to do it. There is more to the subject than
attempting to take the gun away from criminals, which in reality
is not totally possible, as guns are easily purchased
(unregistered) from online or on the street. Presently we have
one of the least restrictive laws related to gun ownership from all
western world...much more relaxed than for ex. in U.K.
O'Reilly on FoxNews calls for NEW LAWS that would mandatory
add 10 years on top of any other sentence if the crime was
committed using firearms. 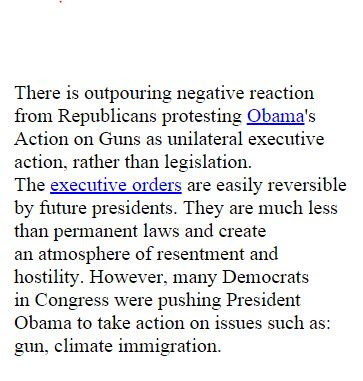 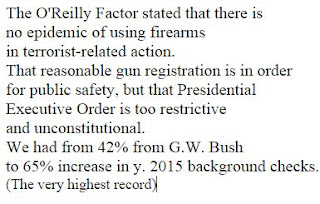 It is a good
suggestion but unfortunately, it would

not solve the compound problem. The O'Reilly Factor refers only to criminal
gun activity..and that makes it a very narrow approach.
Yes. there is a highlighted concern about using the guns during a commission of a crime such as in terrorist attacks, gun related violence, like in drive-by shooting, bank robberies etc.
There is a problem that along with a responsible gun owner,
with the huge quantity of guns on the streets, there is a pool
of peoples, that would simply like to have a firearm because
of the new trend/drive surfacing, resulting from mass shootings,
that create more pro-gun society.
Seems, like owning the gun became something to brag about, like next the
best thing after Harley-Davidson. But most of all it is a natural human
the reaction of peoples wanting fight back terrorism.
I'll argue that ownership of a gun is not the right choice for everybody
due to the factors like character, 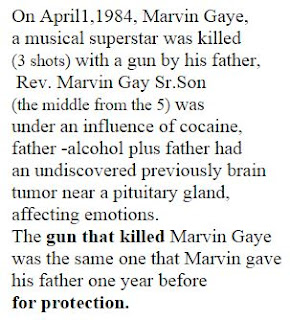 personality, home situation, lifestyle.
How comfortable would you feel
around somebody that has a hot temper,
is very argumentative, was drinking
and have a gun?
...or what about somebody that is suicidal
and have a gun? Mentally unstable?
Scary prospects!
Hey! I sometimes am not too happy
that caps are having guns!
Would be so much better if
officer-in-training Loehmann
(that back in Nov. 22/2014 shot and
killed 12-year-old Tamir Rice
holding a pellet gun,) had at that time a toy gun himself instead of
the real one? That story still churned up my stomach.
But as it is the officer that shot Tamir is not going to face criminal
charges.
What about, the last September  - the fatal shooting by police in
Sonoma County of Andy Lopez, a 13-year-old boy who was
carrying a plastic toy gun that resembled an AK-47 rifle.
Erick Gelhaus, an officer who killed Andy
also  didn’t face any criminal charges (the guardian).
as Timothy McGinty (the Cuyahoga County prosecutor)
announced and added:
“I want to call on the legislature and the manufacturers
of toy guns not to make guns that look so much like the real thing.” (4)
33 people are murder by a gun every day.
At least 28 people with BB or pellet guns were killed in
U.S. by police last year.

With all the freedom of having a gun, we are going to continue
to have firearms used in domestic violence, suicides, or unintentional,
accidental shootings.
Lt. Gov. Carlos Lopez-Cantera,  said: "Restricting Americans' Second Amendment rights is not the solution to ending mass acts of violence like we have seen in recent years". We must address the mental health issues that contribute to gun violence in America...."

From 2011-2013, there were 11 shootings, but the frequency is increasing.
True. Still, while the mass shooting quickly spreads throughout the media
an overall crime rate is half of what it was in 1990 with
32,000 gun related deaths annually (Brennan enter for Justice).
There is increase in workshops offering training in using gun effectively for
self-protection .
They follow the F.B. I. rule: run, hide. fight.
Said that, employees of Planned Parenthood Clinic in Colorado and gov. agency
in San Bernardino had that type of training. Well, we know the results. (3)
President is facing a lot of criticism, like from presidential hopeful
Ted Cruz, that already promised to repeal Obama's executive Action on Guns.
In the same time, the president Obama is surrounded by regular supporters
strong on curbing a gun violence.


Gun control advocates are praising Obama move toward more safe and better control in using a gun. Companies like iGUN looking for secure, smart gun technology, similar to the one that are being used in smartphones fingerprint. reader, The new technology would minimize accidental discharge and unauthorized use. Within 90 days is expected that President Obama will receive a report from Dept. of Defense, Dept. of Justice and Dept. of Homeland Security to expedite the safe gun issue technology. That makes me feel safer and I am thrilled.

A payoff will be -  saving lives. Thank you, President Obama.

Up to now the gun technology was moving forward to create more
killing power, now, saving lives is taking priority.
New coming up technology is design also to be used by our soldiers.
This is a great push forward. If a gun is going to be stolen is going
to be useless.
And, please think how many lives of our children can be saved!
For the old gun to work with the new technology, it would be
necessary to retrofit the gun with a smart locking system.
Well...we got 323M people in U.S. and 300M guns.
It'll be an impossible task to retrofit all.
I am a little overwhelmed with the flood of all the information.
But I gather that we got technology for the past decade that is
user-authentication, a  radio-frequency identification technology
..but with that one is necessary to carry close by RFID -enabled
a device similar to a badge, a watch or a ring.  But all said and done
that technology is still developing and in prototype stage needing
finishing touches.

NOW YOU GOT A GUN!
There are many people that got killed by their own weapon. There are also,
many people that their own or somebody else life was saved with intelligent, timely use of the firearm.
There are a lot of stories to support both.
I am sure that you and nobody else in your household are one of those hot tempers...or easily unhinged individuals, emotionally stressed out or suicidal.
I am sure that specifically YOU in a situation like that would call the hotline, look up  for a friend/doctor to talk things over and never thought about a gun.

Of course, you do not intent to harm somebody...you strictly got a gun because you want safety...for yourself..for your own family
...for protection and not to use unlawfully...that is it! Right?!
Owning the gun is your right and that's it. Right?
So, you got a gun...am I right?!
It doesn't matter if our president cries or not.
These are adult tears...
not a kid's or screaming cute little kittens that move us to give a comfort.
Besides the president has a body guards ready to protect him and shoot
to kill anybody threatening his safety.
Right?...and you got only yourself..and your own gun. Right?!
Americans want guns and prevailed...I just hope that you're sensible,
responsible adult ...well trained in using weapon and safety.
...Of course, I believe that dog is better. The gun has no ears, no voice, no eyes and no love for you...like the dog might have for you if you take care of him.
The gun can not see behind your back or, when you distracted or in the dark approaching intruder and warn you like dog can...and the gun, of course, is not going to give you the sloppy kisses when you're coming home...not going to cry for you or mourn you, if you get hurt or killed.
Killed? Yea! Killed...like done...gone...forever. Killed. You got to think about that when your gun might end up in the wrong hands. Make a will, just so your loved one, at least, get some comfort.
Still you wanted a gun and now you got it.
Obviously, as one nation and you part of it, we're connected...
and we want you to feel secure...and stay alive.
The same we want for everybody else... We want all law abiding people to feel safe in their own homes, on the streets, at work and every place else. The real danger is there..especially now with the very real threat of terrorists and the call for jihads against Americans.
Now, of course, we only have a hope that you keep your gun safe and away from all the little sticky fingers of the children who just love to touch and play with everything forbidden. Their curiosity and a need for exploration is endless and have uncanny ability to look for a danger, exploration, adventure ..that's a way the little kids mind is wired..and of course, play 'daddy', 'mammy' and imitate adults. Children want to do what their parents are doing. The children toys
reflect that. However, a problem might arise when they want to play with the 'real' thing...and that thing is a GUN!
So, now you got a gun...
and more stressed out police...
the officer that might be also tired...and never was a Bill Hickock...more like Calamity Jane. And we know about Jane..she could shoot, of course, but I think that she more enjoyed sleeping freely with casual soldier...and there were even times in her life when she prostituted herself for living.
Gun, often brings the false sense of safety... sometimes working situation through wits and own ingenuity can be better...but you made your choice.
You got a gun, maybe more than one because you feel correctly that double lock or pepper spray can not give you the same level of safety. You're right.
THERE IS NEVER WITH OR WITHOUT THE GUN ABSOLUTE SAFETY...

I got a dog.. and mutual love agreement with my dog to look after each other.
Actually, I believe that my dog reads my thought on many occasions...but in reality, it is too small to protect, just good to warn.
Dealing with the dog and not a gun is my choice. Also, it is my choice - although I don't think I am a mice - to get killed rather than to kill...it's just me...I don't think I could sleep/live or be in any way O.K. if I killed somebody.
Accidents, at times, are unpreventable and the person that I shoot in alteration could be the silly, neighborhood kid. I would not want this to happen.
My decision is my own.
Yours is yours and I respects your rights...
right to have, your right to choose
...I respect your desire for safety.
Please respect mine.
Please, respect my right to live.
Please do not kill me...accidentally.
Now, you got a gun...please, DON'T SHOOT.
Thank you.
Ed Lorens
edlorens
edlorens.blogspot.com
ed lorens YouTube


In Douglasville, Ga., and other cities, seminars instructing residents to stay alert, and to attack the attacker if necessary, have become increasingly common.